skip to main | skip to sidebar

The Buffalo Sabres kicked off today's Puck Drop 2008 festivities at 9:00 AM Eastern Daylight Time this morning and fans across the Western New York region couldn't have been more thrilled.

With yesterday's launch of their brand new online media player, a special edition of Sabres TV provided a live internet video stream of this morning's festivities from HSBC Arena in downtown Buffalo. Kevin Sylvester and Mario Genero co-hosted the Sabres TV coverage with glimpses of a beautiful mural inside the arena's main concourse and the Blue vs. Gold scrimmage. As far as the mural is concerned, it commemorates last season's AMP Energy Winter Classic that was played on New Year's Day.

Speaking of that memorable game, The Making of a Classic DVD went on sale today. As I mentioned back on Monday, if you weren't able to attend Puck Drop 2008, you can order the DVD online at Sabres.com or visit the HSBC Arena box office during regular business hours. 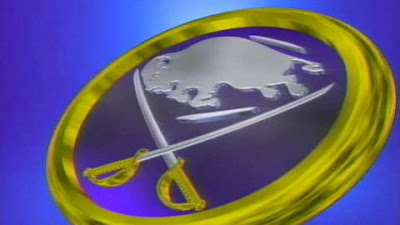 The Buffalo Sabres' vintage logo is displayed on the center ice video board at HSBC Arena during the alternate jersey unveiling ceremony on September 20, 2008.
(image courtesy: Buffalo Sabres)

After the scrimmage was played, the Sabres players headed to the locker room and then returned for an on-ice ceremony to unveil the new alternate jersey. Fans saw a video presentation on the center ice high definition video screen of great moments in Sabres history. When you got to see the vintage primary logo first appear, it felt so right that it is back.

One highlight that sticks out immediately is the "May Day!" goal from Buffalo's 1993 playoff series victory over the Boston Bruins. Brad May scored the winning goal that sent the Aud into a frenzy. But television play-by-play announcer Rick Jeanneret's livecall was absolutely what makes watching it over and over again worthwhile.

Then Jeanneret introduced to the crowd the main roster players that were all decked out in the new alternate jerseys. An estimated 10,000 fans cheered loudly as they got to see them publicly for the very first time. 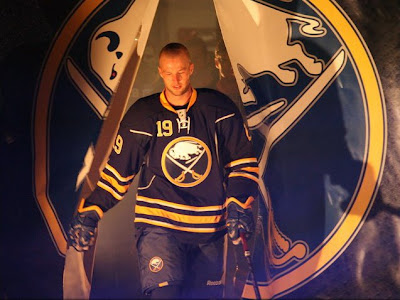 Tim Connolly heads out onto the ice during the alternate jersey unveiling ceremony at HSBC Arena in Buffalo on September 20, 2008. (photo by Bill Wippert/Buffalo Sabres)

And then the team circled the ice surface to give the fans a closer look before giving a final salute from center ice. This day was truly for all the dedicated Sabres fans that came out for Puck Drop 2008. 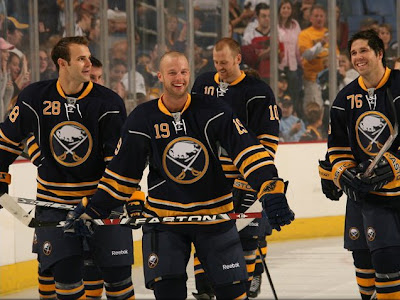 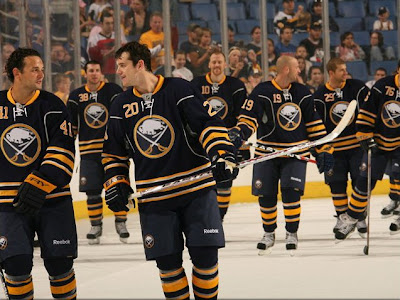 Buffalo Sabres players skate around the ice surface during the alternate jersey unveiling ceremony at HSBC Arena
in Buffalo on September 20, 2008.
(photos by Bill Wippert/Buffalo Sabres)

As mentioned on their August 14th news release, the jersey features a modernization of the team's vintage design. Paul Szeglowski of his outstanding Lets Go Sabres blog explained that with the vintage crest logo being brought back with some minor alterations, he believes that the Sabres feel will help it stand out more against the darker navy blue base color of the jersey. 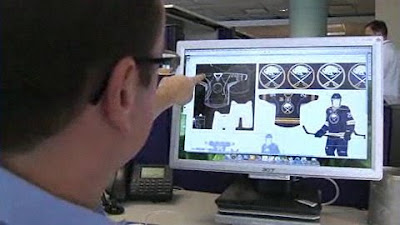 "The first thing we wanted to do is go to our new color scheme, which is the deeper blue and gold," Cravotta said. "After that we added the striping pattern, introduced some silver accents in it and put some silver vertical piping along the front... It makes for a new and unique look." 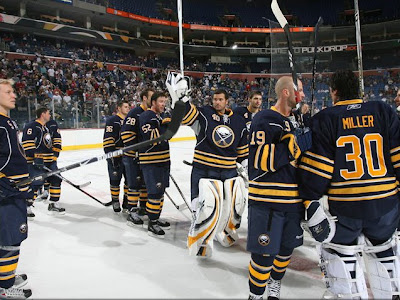 Did the fans approve? According to 10-year-old Brendan Bittner of Hamburg, New York, I think it is safe to say he does.

"It has the old '70s logo sort of combined with the new type of logo," she said. "It just looks really cool."

Speaking of the Buffalo News, their regular Sabres beat writer John Vogl reported from the arena today with an overall recap of the events. It includes some fan interviews with one of particular interest as Chris Kostka of Ajax, Ontario is proud to see his son Mike trying out for the team (he's on the official training camp roster).

Two Buffalo television stations provided excellent coverage of Puck Drop 2008, including the mention of the new alternate jersey. Adam Benigni of WGRZ-TV also gave an overview of both the scrimmage and the jersey unveiling ceremony. Michele McClintick of WIVB-TV had described the atmosphere at HSBC Arena as simply "rockin' again". You can also check out her report from the site of today's festivities.

Just like the Carolina Hurricanes' new alternate jersey, if you want to purchase an authentic Sabres' one, it'll cost you big bucks. Expect to pay as much as $350 for a fully customized game jersey that is exactly be what the team will wear for 15 times this upcoming season. Due to what is expected to be high demand and production being high, don't expect delivery until around the time of its debut on November 26th when the Bruins visit Buffalo. 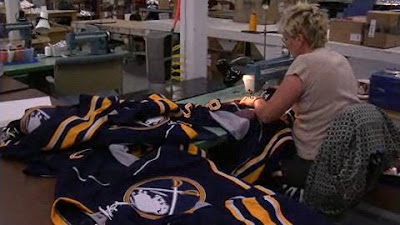 As stated in the team news release, fans can now pre-order the alternate jersey at the Sabres Store in HSBC Arena with at least a $55 deposit for each jersey. But if you're customizing it, you need to pay in full.

Meantime, I strongly recommend you also pay a visit to Chris Smith's Icethetics blog for his coverage of today's jersey unveiling. He also provided a photo slideshow of the jersey, but I especially like the nice large photo of Teppo Numminen he posted.

Without question, I believe the Sabres' new alternate jersey will be a big hit with the fans. It is my hope that eventually this becomes the full-time home jersey. After that, hopefully the team creates a road white version and then brings back the classic royal blue vintage jersey we saw last season to become the full-time alternate. Now THAT would really do some good completely restoring in pride in the team brand, not that "Buffaslug" we see now.

If you would like to see a very condensed (and I mean shortened) version of the Sabres TV coverage of the alternate jersey unveiling and other Puck Drop 2008 events, check out the video clip below.

other blogs around the NHL